Scrub potatoes and cut any very large potatoes in half so that all potatoes are of approximately equal size. Place potatoes in a large pot and cover with cold water. Bring to a boil and stir in 1 teaspoon of salt. Reduce heat and simmer potatoes for 15 to 20 minutes or until potatoes are tender when stabbed with a fork. Drain water. Leaving potatoes in pot, return pot to still-hot (turned off) burner. Leave lid off of pot and allow potatoes to steam dry for a few minutes. Cut bacon strips into approximately 1-inch pieces than cook the bacon strips in a large pan until crispy. While bacon is cooking, cut potatoes into 1/2-inch thick slices. Cut any extremely large slices in half. Set aside. Once bacon is done, remove from stove and use a slotted spoon to remove bacon to a bowl while leaving bacon grease in the pan. Slowly and carefully add vinegar, sugar, Dijon, salt, and pepper to the pan of bacon grease. Place pot back on burner and bring mixture to a simmer, stir for a couple of minutes. Add the minced garlic into the mixture and cook for 30 seconds to 1 minute, or until garlic starts to turn a light golden. Remove pot from heat and toss in the sliced potatoes, gently mixing until potatoes have absorbed all of the liquid. Carefully fold in the cooked bacon pieces and chopped parsley. Transfer potato salad to a serving dish and serve hot or warm. This potato recipe is brought to you courtesy of Deborah MacDonald. 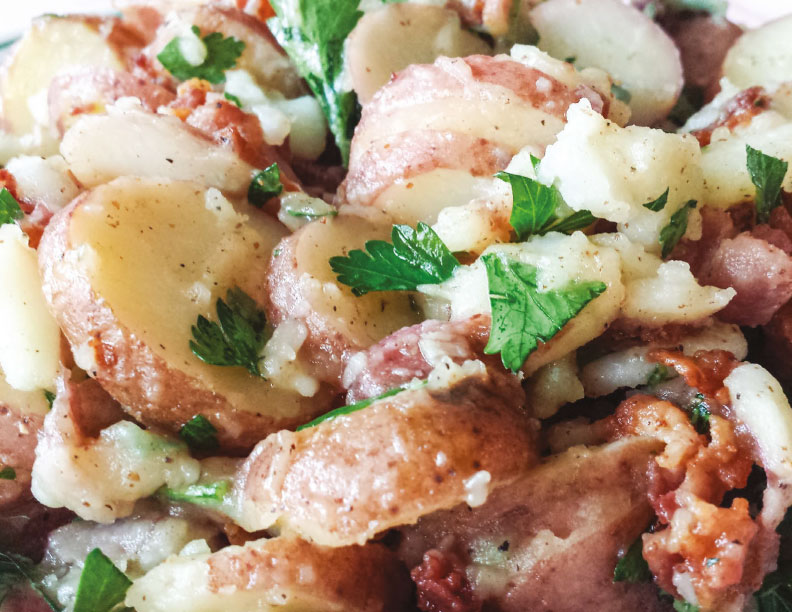