The Griffin family and their company W.P Griffin Inc. have made a commitment to the Prince County Hospital Foundation. Siblings John, right; Peter, left; Barb (Griffin-Lewis), second left, and Eleanor (Smallman) and have pledged $9,000 to help their hospital and its patients by supporting the PCH Foundation's annual equipment campaign. In doing so they are paying tribute to their parents Wilfred and Marie Griffin, as well. The family and business have been very supportive of the PCH over the years; the family began donating to the Foundation in 1995. John remarked, "We want to create an ongoing legacy in memory of our parents and we thought the hospital was a great place to do that". The Griffins recently presented the first of three $3000 gifts to Foundation in August. 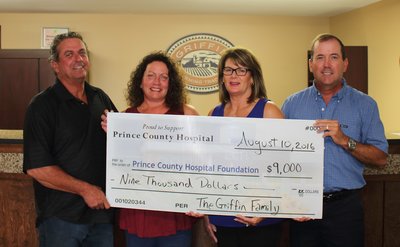 Most Dependable Employee of the Year Award

On July 29th, 2016 the W.P. Griffin hosted their annual staff BBQ season end party at Bloomfield park. John & Peter Griffin presented Mike Hagan with the award for 'The Most Dependable Employee of Year Award'. 'Toss the Ring' was played and door prizes were given out. Hot Dogs, Hamburgers, Sausages and baked potatoes were served. 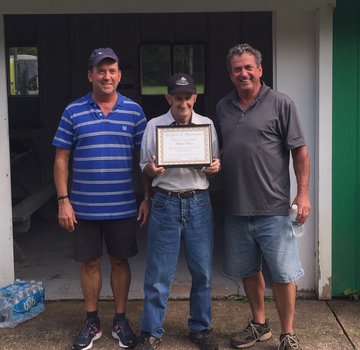 The Atlantic Business Magazine has named Elmsdale potato grower, packer and shipper, John Griffin its 2016 Innovator of the Year. Griffin is president and general manager of W.P. Griffin Inc. The family-owned business, started by his father, Wilfred P. Griffin, nearly 70 years ago, has grown by light years in the past decade and a half. Since 2001 the business has been in the hands of Wilfred's sons, with John running the business end of the operation and Peter, the vice-president, in charge of on-farm operations. Both owners grew up around the farm operation and have been actively involved since their teens. John has been in charge of the financial side of the operation since graduating university with a business degree in 1988. The brothers have steadily added consumer-friendly, value-added features to their operation while attracting new customers. The company was named the Erns & Young Atlantic Entrepreneur of the Year in 2012, and John Griffin has been named an Atlantic Canada Top 50 CEO each of the past four years. 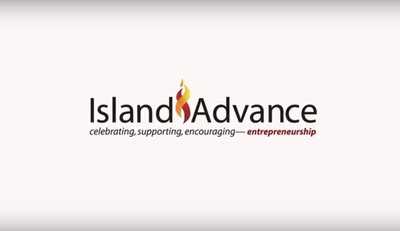 ELMSDALE -- The Canadian Potato Museum in O'Leary has developed into a significant piece of the North Cape Coastal Drive experience, acknowledges museum president Bill MacKendrick. MacKendrick acknowledges the generous contributions of Sobey's and W.P. Griffin Inc., for helping to grow the museum into a major attraction. The $30,000 donation Sobey's and W.P. Griffin Inc. provided Tuesday brings their four-year contribution to $144,500. The two companies, combined, to make a 25 cent donation to the museum for every bag of Canadian Heritage brand russet potatoes Griffins sold through Sobeys stores in Atlantic Canada during potato month, the last four Februaries. "These dollars have been used in various ways, such as incorporation of new displays, purchase of kitchen equipment for our café and other capital improvements," MacKendrick said in extending thanks to the two financial contributors and to the companies that sponsored prizes for the promotion. "The financial contributions have helped position the museum in its ongoing quest to be the best it can be," he said. The money, he said, helped last year with over $60,000 worth of renovations. The exposure from the campaign also helps draw visitors to the facility. He added the 12,000 visitors annually provide tremendous economic spinoffs for O'Leary. "It's good for everybody involved," said Peter Griffin of W.P. Griffin Inc., acknowledging the February campaign promotes all of P.E.I. The winner of a grand prize package, provided for the 2016 Potato Month promotion by The Holman Grand Hotel, was announced following the $30,000 presentation to the Potato Museum. The accommodations, dining and spa package, as well as admission tickets to the museum, goes to Colleen Harnum from Deer Lake, NL. 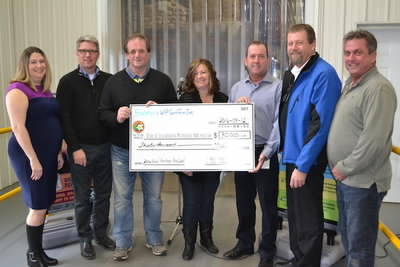 W.P. Griffin Inc. is pleased to announce that we are launching Ireland's Favorite Potato just in time for Saint Patrick's Day on March 17, 2016. "We have been working with this new variety for a few growing seasons now and we are excited to be offering this new variety to Atlantic Canada". The Rooster potato variety was originally developed in Ireland and now accounts for 70% of all table potato sales on the Emerald Isle. It is also the #1 potato in all of the UK. "Sobeys has agreed to partner with us for the launch on Saint Patrick's Day by offering free in-store sampling in all Sobeys stores in Atlantic Canada on March 17th". Ireland's Favorite Potato. And trust us, the Irish know their Potatoes. Rooster potatoes have reddish skin, light yellow flesh, dry and fluffy texture with a nutty favour. They are great baker, mashed, boiled and fried. 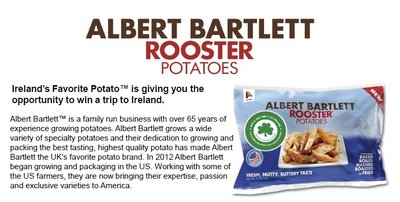 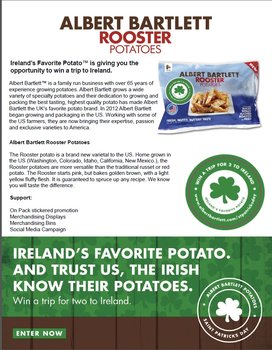