Toonies for Tummies - Dig in Do Good

In it's second year in a row, W.P. Griffin Inc. donated $18,900 to The Grocery Foundation for school breakfast programs in Ontario.  For every 10 pound bag of Dig In Do Good potatoes sold, 25 cents went towards this program during the months of December 2019 and January 2020 to this worthy cause.  To-date in total for the last two years, W.P. Griffin donated $38,900 to The Grocery Foundation. 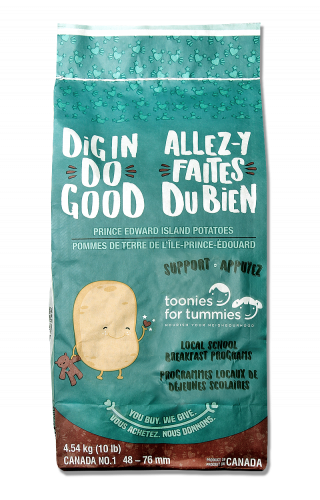 Children's Hospital - Dig In Do Good

Toonies for Tummies - Dig In Do Good

WP Griffin Inc and Sobeys jointly present a cheque for $20,000 to The Grocery Foundation for school breakfast programs in Toronto, Ontario. 25 Cents from every 10 pound bag of Dig In Do Good potatoes sold in December and January went to this worthy cause.

W.P. Griffin Inc. in Elmsdale just launched a new line of Potato Cuisine mini potatoes in microwaveable trays. These are microwaveable trays of mini potatoes being packed at WP Griffin Inc. in Elmsdale. The new line of Potato Cuisine creamer potatoes is being sold in Sobeys, Foodland and participating Co-op stores from Ontario o Newfoundland. The first orders went out recently. While the Potato Cuisine product line is new, the company has been growing and marketing mini potato creamers to customers, primarily in Atlantic Canada, since 2004. They have also marketed trays of regular sized potatoes that could be peeled or diced.

"This line is sort of an evolution of those other products, in terms of the mini potatoes don't need to be peeled or sliced or diced; you just microwave them or barbecue them," Griffin said. The new line is being sold in Sobeys, Foodland and participating Co-op stores from Newfoundland to Ontario. Griffin said his company has been a Sobeys supplier for nearly 50 years. Getting the new line to market was close to a two-year process, he acknowledged, noting they had to install a specialty weighing station capable of accurately weighing minis in 454-gram sizes. They've installed a new air-tight sealer for the trays, and the sourcing of the proper microwaveable film for the trays took about a year. "Finally, it all came together, a little slower than what we liked, but we're pleased with what we've come up with" said the company's president. "Hopefully the consumers are, too." The product line is so new, that staff is still finalizing how and where the equipment needed for it will be configured in the Elmsdale packing warehouse. Joel McDermaid, the plant's efficiency officer, said the Potato Cuisine packing area will be reconfigured to efficiently accommodate the six workers needed for peak production. "It's great product and it tastes right," McDermaid said. Griffin is anticipating a spike in demand within a month, once customers get their first taste of the new product. The minis are washed and then graded multiple times before going through a polishing station, a final grading and entering the sophisticated weighing station. A spice pack is included with each tray of mini creamers sold. "In the field, (mini creamers) are grown for that size. There are no big ones and they are not the off-grade of regular potatoes; they are a special variety grown just to be that size," Griffin said. "It's a rare type of potato variety that's hard to get and there is only a handful of people growing them." Griffins grow about 250 acres of red, blue, yellow and white varieties of minis and can pack the trays in different colour combinations. Depending on the uptake, the company is prepared to increase its acreage of minis. "The original Jounal Pioneer article - was written by Eric McCarthy - Jan 30"

WP Griffin on Maritime Made TV

Tour our potato wash plant and see how potatoes are washed, sorted and packaged in various bags, boxes and trays. 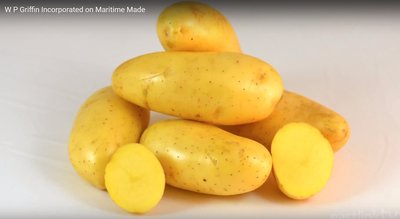 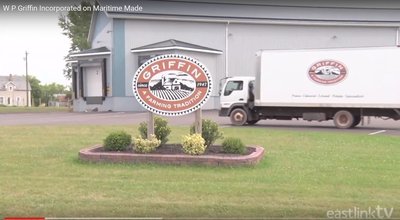 Children's Hospital-2018-Dig In Do Good